What Makes an Asset an Asset in ICounting?

One of the very basic tenets of accounting is that you only show as assets those things that you own. It’s completely obvious and sensible. That tenet will never change. Nor should it.

But this is one of the tenets that makes it hard to rely on accounting alone to understand how organizations work in today’s world. Because what defines a company or an organization today is not really what you own. It’s about what you attract. Can you attract the right people, the right partners, the…

The Strategic Role of an ICountant

In my post last week about ICountants versus Accountants, I talked about the critical role that accountants play in conforming to accounting and reporting standards. These standards are critical to the functioning of our economy—they ensure that readers can understand and…

There are and infinite number of interpretation to what is routinely referred to as what ‘the American dream’ and an equal number of paths how to achieve it.  The notion of ‘the American dream’ has certainly embedded in political rhetoric as one need only watch C-SPAN and listen to countless elected politicians consistently apply those three words to produce - elicit a myriad of emotions, imaginations as well as anger and frustration among…

I’ve been talking a lot about ICounting lately but I haven’t talked about ICountants. Since the name is a play on the word Accountant, it’s helpful to talk about ICountants in comparison with our financial friends.

Accountants are trained professionals with a broad variety specialties. Some are CPA’s, others management accountants, controllers, bookkeepers, auditors and many other specialties. Accounting is their primary job. All accountants work inside a standard framework of…

Accounting has roots that go back 500 years to Columbus-era Venice when local  merchants built global businesses and needed ways of keeping track of their financial transactions. This system worked well over the following centuries even as the global economy changed dramatically through industrialization. That’s because it is a system to track financial transactions. The…

Counting What Counts - Accounting and ICounting I had a lot of fun on the IC for IP panel this week at the Intellectual Property Business Congress in Boston. The level of appreciation for the links between IP and IC weren’t too surprising. What was surprising to me was how much we ended up talking about accounting.

There are many cases of…

I routinely have the opportunity to talk with a cross-section of business leaders and entrepreneurs about my favorite topic; intangible assets.  One particularly stimulating conversation occurred with a very astute colleague and yes, it was about intangible assets.

My colleague certainly intended no disrespect to me or other intangible asset advocates and strategists by suggesting,…

The Highest and Best Use of Intellectual Property 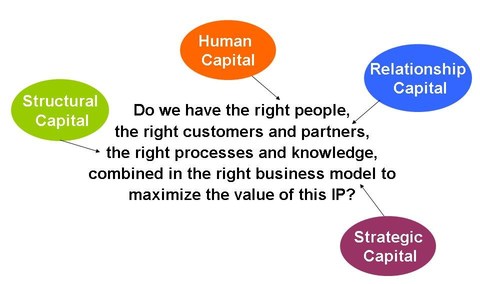 The Intellectual Property Business Congress 2013 is kicking off tonight in Boston. I’m excited to have it in my home town. I’m also excited and honored to be on a panel on Tuesday discussing how to use intangible capital to enhance the value of IC.

In preparation for that discussion, I thought I…

In financial accounting, a balance sheet or statement of financial position is a summary of the operational infrastructure of a business. Assets, liabilities and ownership equity are listed as of a specific date, such as the end of its financial year. A balance sheet is often described as a snapshot of a company's financial condition.

Until recently, corporate financial condition was directly tied to the health of a company’s tangible assets. You could read a balance sheet and…

We all know that peer review is the standard method of grant and publication review in academia. As such it performs a gate-keeper role in the creation of knowledge. But there is another role that the peer review process plays in the creation of intangible assets: learning. According to an article published in The Scientist, "The grant-review process plays significant roles in the education of researchers and in shaping scientific…

Most organizations today are highly dependent on the strength of their people, systems, processes, relationships and strategy for success. Yet these intangibles are invisible and rarely managed in a systemic or holistic way.

This is a problem because, for better or worse, people tend to pay more attention to things they can measure. Measures help frame thinking and…

Earlier this week, the Commission on the Theft of American Intellectual Property issued its report. The Commission, a independent group, found that international infringement of US intellectual property (IP) -- "theft" -- is a $300 billion problem.

Regrettably, the report perpetuates the misunderstanding that intangibles equals IP:

According to a figure cited in the president's 2006 Economic Report to Congress, 70% of the value of…

IC in my hometown- a small village perspective

I am preparing for some photos