I came across this interesting discussion on getting the CEO's attention that I think is especially relevant to promoting greater understanding of intangible capital. Every year the Conference Board does a survey of CEOs around the world on what they see as the biggest issues facing them. In this video Bart Van Ark discusses the most recent CEO Challenges survey. The number one issue facing CEOs is human capital. But he makes the point that CEOs are now focused more on the utilization of…

Upcoming webinar on IP and IC

Mary Adams and I will be hosting a webinar on "Maximizing your IP" for the consulting company Oxfirst.

Intellectual Property (IP) is a critical strategic asset for corporations. But there are enormous differences in the value of IP stemming from the ecosystem that supports commercialization of the IP. What are the elements of the IP ecosystem? Can they be modeled and measured? The answer is yes. This talk will introduce basic concepts about how to model, measure and maximize the…

Giving into pressure from activist shareholders, Timken recently split in two companies. There was a detailed profile of the situation in the New York Times on Sunday.

I was struck by one of the early unqualified statements by author Nelson D. Schwartz:

As in all publicly traded companies, TinkenSteel’s board and top executives have…

The dynamics of intellectual resources during the economic crisis

I have just published a paper with my co-author Elena Shakina about the changing role of IC during the economic crisis.

This study has been carried out in our International Laboratory 'Intagible-driven Economy' (ID Lab).

The paper investigates factors of corporate success over the crisis period of 2008–2009. We advocate the idea that investments in intangibles allow a company to be better off, even if the markets go down. We have… When I have made plane reservations for my college student sons over the past few years, they never insisted on an airline but they always thanked me profusely when I booked them on JetBlue.

That may be changing. The company made the announcement on Wednesday of a number of changes:

We spend a lot of time in this community talking about how to make companies smarter and more successful. But a few weeks ago, I realized that we have never really defined what we mean by "smarter companies." The answers are complex and rich and something we all need to continue to define.

But as I thought about it, I came down to three key characteristics…

This summer I wrote about the great research on intangibles in the Chilean Wine Industry done by Mark Dutz and colleagues at the World Bank. And I promised to let everyone know when the full study was released. Here it is and I highly recommend it to anyone interested in intangibles: Public and private…

Last fall OECD (the Organization for Economic Cooperation and Development) published Supporting Investment in Knowledge Capital, Growth and Innovation. This book-length report is the culmination of the first phase of its flagship project on New… Continue

Financial Analysis of the Knowledge-Based Enterprise

Gospodarka Narodowa is a Polish academic journal dealing with current economic and economic policy issues. Published since 1931, Gospodarka Narodowa is one of the oldest economic journals in Poland with a well-established position on the market. It publishes work by leading Polish and foreign economists with different theoretical and empirical approaches. It just published interesting article entitled as this post. Here is its english…

A story that gets it -- from The Tennessean (Nashville): "Intellectual capital an undervalued asset":

In case you haven’t noticed, thousands of organizations are in some form of generational transition. All you have to do is look around your company, and you’ll see men and women actively contemplating or planning their exits. Millions of…

Investing in the future

There’s a fascinating “Room for Debate” discussion at the NYTimes entitled Profiting Profits or Reinvesting Them  with the prompt:

Corporations have gone from reinvesting about 90 percent of their profits into their business in the 1970s, to about 10 percent today, William Lazonick wrote in a… 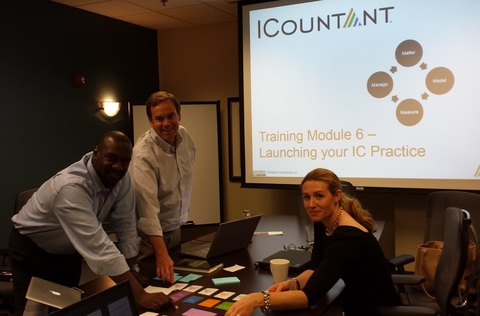 Welcome to our newest ICountants Curtis McLean, Nat Bulkley and…

This morning the SEC unanimously adopted a long delayed rule on transparency of asset-back securities (ABS). Required under the Dodd-Frank Act, the final rule turned out to be less controversial that previously proposed versions. The new rules will require collection and disclosure of certain types of information ("data points") about the underlying asset (i.e. the mortgage). This includes information such as… Continue

ICounting - Change the conversation using measures that matter from…
Continue

Last week I had the enjoyable privilege of participated in a session at the Digital Government Institute's Government Knowledge Management Conference. The session was a lively discussion among the panelists and audience kicked off with brief opening remarks by the panelists. The full background set of slides upon which my remarks were based are now available on line at…

Here is a new short video from OECD on knowledge-based capital.

Improving how we use intangibles to boost productivity

Thanks to Paul's recent posting , I am catching up on the McKinsey report on Innovation Matters: Reviving the Growth Engine from June 2013. The report introduces an index of "Innovation Capital" as a combination of "Physical Capital" (i.e. ICT… Continue

The Case of Market Basket - When the intangibles become tangible

Here in New England, a corporate drama is unfolding that illustrates so many of the core ideas that we hold in the ICounting/IC community.

The drama involves a family-owned supermarket chain called Market Basket. There’s a long story of conflict between two sides of the family: one that controls 51% of the company and the other that controls 49%. The long-time CEO Arthur T. Demoulas is from the minority shareholder group and was forced…