There’s a great new study of the Chilean wine industry funded by the World Bank that shows a direct connection between the level of investment in intangible capital by wine producers and the explosive growth in Chilean wine exports (they grew at an compound annual growth rate of 9% over 20 years reaching $1.2 billion in 2010).

Here are the basics. The study shows that the great majority of both large and small producers (by number of hectares under production) spent considerable amounts in training (human capital in SmarterCo language), software (structural capital) and reputation/branding (relationship capital). Large producers also invested in global collaboration (strategic capital).

It’s interesting to note that investments in R&D are less frequent. This is important because many people tend to equate intangibles with R&D and patents. Although the spending on/use of R&D would be higher in other industries, we cannot ignore the supporting knowledge ecosystem around intellectual property. 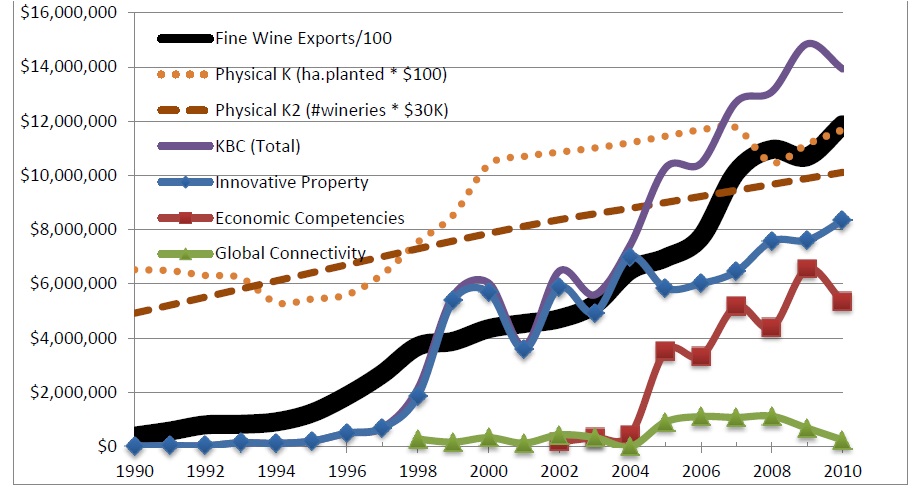 In this graph, the IC investments (shown separately in blue, red and green—and totaled in purple) mirror the growth trajectory of the exports. The two brown lines show tangible indicators: the number of wineries and hectares under production. These, too, grew. But not as fast and not along the same trajectory as the intangibles.

The conclusions of the study included:

This study is very exciting for a number of reasons.

First, I’m heading to Chile for a week of meetings and presentations next week with our partner AKLOE. I am really excited to discuss this case with the innovation, business and academic communities in Santiago. I promise to report back on what I learn.

Second, the methodology used by Mark Dutz and his co-authors lbuilt on great work by The Conference Board, OECD and a research team in the U.K. including Jonathan Haskell that did a primary research project on intangibles spending a few years ago. Connecting these dots is important. I expect that we have the start of a powerful approach.

Third, I’m especially excited about the work because it looks at the actual spending on intangibles, something I’ve been advocating for years (see Ch 7 about i-capex in Intangible Capital). Measuring i-capex a simple and powerful way to begin to measure intangibles in a reliable fashion. I strongly believe that this will someday be standard practice. It just makes too much sense to not end up in the standard financial package.

Finally, they worked to also incorporate concepts of risk. This is an important part of the intangibles story that we all need to spend more time on. Awareness of intangibles as assets is growing. How to express/measure the liabilities is still less studied. At SmarterCo, we’re doing this by focusing on the relative strength/weakness of individual intangibles. But we all have a lot more work to do.

In Chile, we’ll also be training a new crop of ICountants. With this great example in their own backyard, maybe our colleagues there will break new ground for our field!