The World Intellectual Property Organization (WIPO) recently released its World Intellectual Property Report 2017 under the title Intangible Capital in Global Value Chains.  The key finding of the report is that “one third of the value of the products you buy comes from intangibles such as technology and branding” with roughly 47% from labor and 20% coming from tangible capital.

This is no surprise to those who study intangibles. But it’s great to see it documented in such detail by country and industry. The report is also strengthened by its deep examination of three industries: coffee, photovoltaics and smartphones.

I recommend this as another dataset [see other data here] that helps us understand the tectonic shifts in global and local economies in recent decades. For those in our community, I’d like to share some thoughts about how this data relates to the broader intangible capital and integrated reporting communities:

The authors use a limited definition intangible capital – Traditional models of IC (like we used in our book Intangible Capital) include human, relationship and organizational capital.  This paper was produced by economists for whom labor is a known variable.  Thus,the authors do not include human capital/labor in their definition of intangible.

Intangibles are the undefined portion of the equation – The supply chain value calculations use data on wages, employment and tangible capital asset stocks to calculate labor and tangible assets. The remainder of a product’s value was then considered intangible. This essentially the approach taken in the Ocean Tomo stock market study which subtracts tangibles from corporate value to derive intangibles. (Their latest calculation shows tangibles now down to 16% of total corporate value).

By the way, these calculations of intangibles as the unknown in an equation will continue until spending on specific intangibles is measured more carefully (see my discussions on i-capex)

This is about income from capitals, not the capitals – This is an economic study that examines the income that accrues to the three kinds of capital (a flow) rather than the capital itself (a stock). Alternative measure of capitals use stock market data (like Ocean Tomo). Hopefully some day, we'll have accounting data that differentiates between investment and cost. 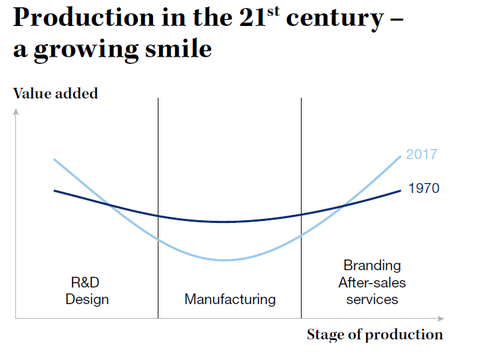 Value now comes less from the manufacturing process itself and more from pre- and post-production – In the industrial era, a big part of the value in manufactured goods came from production processes. This study affirms what is called the 21st Century smile, that is that more value in products now comes in pre-production such as R&D and design, as well as post-production activities such as branding and after-sale services.

There’s growing income from social and natural capital – For those of you interested in a fully-integrated model with six to seven capiitals, you’ll be wondering what happened to the externalities such as social and environmental footprints. You’ll be very excited to see how this approach identifies the growth in incomes for coffee industry segments where consumer demands for fairness and sustainability in supply chains is changing the ways of doing business.  And the value is showing up in these economic measurements!

The most important part of this study? It shows us a path to connecting the dots between the financial and non-financial aspects of the capitals.