Sibos, Innotribe and Dealing with Disruption in Finance 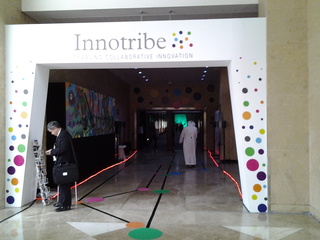 I have an admission to make. I was at this enormous Sibos banking conference with 9,000 people and managed to basically never leave the stimulating environment created by Innotribe. Innotribe creates a world unto itself that you enter by heading through a portal and down a hall filled with ever changing music, video and displays. And the space itself was designed to make it clear that different thinking was going on.

The discussion tracks were Value, Innovation, Big Data and Practice. The Practice track included hands-on sessions for experiencing activities like scenario thinking and visual thinking. In our Value track, we had a discussion and then an exercise about intangible value and a discussion of alternatives to GDP, and a great game by Happathon. Innotribe also leads a Startup Challenge that featured all kinds of financial technology startups. The thing that really surprised me was the number of companies that are developing their products for/in less-developed countries. Of course, disruptive innovations often come from the bottom of the market and even though I have been hearing about innovation at the bottom of the pyramid for quite awhile, I was still surprised to hear so much about it, even in the general session. It seems that a billion people that already have cell phones don't have bank accounts. There's obviously an opportunity there. However, in spite of the open discussion about the unbanked, there was a lot of discomfort in some of the discussions about potential disruptions to the industry, especially the part served by Swift members around payments and clearing. Swift is, after all, a network that predates the internet. Many of the products in the startup program were potentially really disruptive to this network and to the business models of the banks in the network. The most extreme example of this was Bitcoin, represented there by Patrick Murck. This degree of change is hard to deal with when you are the incumbent. But there’s no hiding from change.

We also heard this (natural) discomfort in the discussion about investment management and intangible capital. A lot of people took issue with my statement that Facebook and Twitter could/should go directly to their networks to raise money. One audience member explained that the investment management industry provides transparency and stability. Another explained that governments need to control the industry and would never allow big changes. Really? I pointed out that the crowdfunding movement is a sign of governments taking Christensen’s advice on disruptive innovation and how large organizations at risk need to create experimental programs to figure out new possibilities.

My advice to many delegates was to pull out The Innovator's Solution and face coming changes head on. What was clear to me is that we live at a moment where the entire financial system can and will be changed. It's all part of the trends we regularly talk about at Smarter-Companies. Power is shifting and the outcomes, we believe, will be better futures for organizations and their stakeholders. Be part of it!