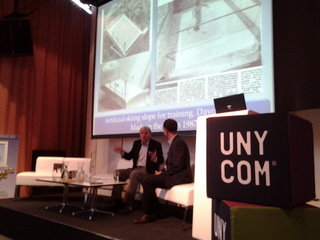 I just got back from another trip to Europe. This time I was at the Smart Insider user conference for Unycom, the software company that’s been doing exciting work for IP departments of many European (an now U.S.) firms.  The conference opened with a really fun conversation with Peter Florjancic, a 95-year-old local inventor who has had more than 40 successful patents that he monetized. His talk energized everyone about the power of invention and innovation.

I was up next talking about IT-IP-IC, the triple threat of the modern business. It was a great theme for my keynote and I was really encouraged by the reception. In the past, many in the intellectual property space have tended to think very much inside the box of IPR (IP rights), just the IP that is protected by specific laws (mostly as patents and trademarks, some as copyrights and trade secrets). But it was clear to me as I spoke with the Chief IP Officers (CIPO’s) of some of Europe’s major companies that there is a growing appreciation of IP more broadly. I even had a great conversation with one CIPO about the key importance of process as a corporate asset. Unycom set up three half-day sessions on big themes where IT meets IP: collaboration, big data and security. Of course, IC thinking contributes to each of these topics. To be implemented successfully, each requires systemic, holistic thinking--you can’t think about any of them without balancing human, relationship, structural and strategic capital.

I have to say that it was also very cool to visit Graz, a city in southern Austria that I’ve never reached in past trips. It is a beautiful combination of old and new with buildings from the 12th and the 21st century, and wonderful local foods including the locally-produced pumpkin seed oil which is my favorite new salad ingredient!

Finally, I was thrilled to be able to catch a cup of coffee with Manfred Bornemann and Karin Grasenick, two practitioners who have a lot of experience with IC thinking and consulting. They promised to share more of their work with our community in the future!

Now we’re hard at work getting ready for ICICKM next week in Washington DC. I’m looking forward to catching up with friends and colleagues there from all over the world. It’s conversations and connections like these across the globe that help build momentum for our global movement to change how companies are managed and measured—and unlock the potential of people and organizations for greater prosperity.

Thanks to my hosts in Unycom and Graz. It was a great trip!